15 awesome science experiments to do with your kids!

Explore a magical world with your kids at home – 15 awesome science experiments! 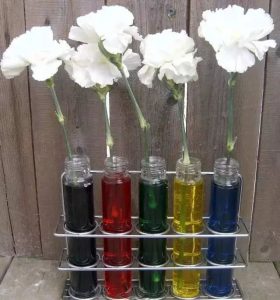 Material preparation: white carnations, food coloring, water, cup
How to make:
(1) Pour the same amount of water into the cup, and put a few drops of food coloring into one of them
(2) Put the flowers into transparent bottles, and observe the change of the color of the flowers after a few days.
Scientific knowledge: The stem is one of the vegetative organs of the plant, which has the function of supporting the plant and transporting water and nutrients. The stem of the plant transports the water and nutrients absorbed by the roots to the various parts of the plant from bottom to top. The flowers in the vase change color precisely because the stems conduct the blue ink.

Blow up two balloons, tie them to prevent air leakage, and connect them with thread.

Since the two balloons have the same charge after being rubbed by the fluff, they will repel each other and naturally separate. 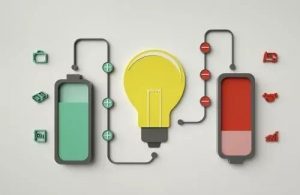 Material preparation: various types of batteries, electric toys, a battery family map.
Experimental operation:
(1) Let the children observe the appearance characteristics of the battery, and classify or queue the batteries according to the model and function.
(2) Guide the child to choose the appropriate battery, put it into the electric toy in the correct way, and make the electric toy move.
Science knowledge:
A battery generally refers to a small device that can generate electricity, such as a solar cell. The chemical batteries we usually use can be divided into primary batteries and accumulators. The primary battery can generate current after it is made, but it is discarded after discharge. The accumulator is also called a secondary battery, which can be discharged after charging, and can be charged and reused after discharging.

At present, our general disposable batteries mainly include carbon batteries and alkaline batteries. Generally, each section is 1.5V and is cylindrical. The common models are A,AA, AAA . The larger the number, the smaller the model. When we correctly install the battery into the electric toy and turn on the switch, the battery can provide current to the circuit. At the same time, the electric energy is transformed into mechanical energy, and the toy can move. 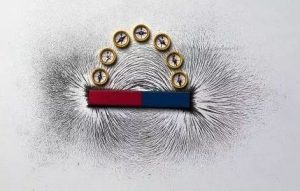 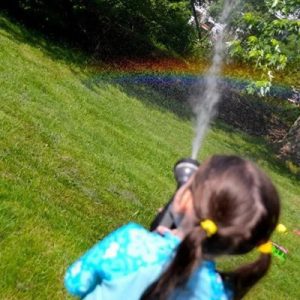 Material preparation: two plastic water bottles, a compass; an awl, some water; a needle.
Experimental operation:
1. Use a needle to poke about twenty small holes in the plastic bottle cap, fill the plastic bottle with water, and close the cap tightly. People turn their backs to the sun, hold the bottle, squeeze the water gently, and then see the rainbow.
2. Use an awl to poke a hole in the other cap and repeat the above test, this time no rainbows can be seen in the light rain sprayed from the cap.

Material preparation: a long straw, a pair of scissors; a milk bottle; a bottle of water.
Experimental operation:
1. Use an empty glass milk bottle and put half a bottle of water into the bottle;
2. Use scissors to cut a slit about one-third of the long straw, so that it is almost disconnected, but still connected a little;
3. Bend the straw at the incision, insert the longer section of the straw into the water, and the incision is on the water surface. Blow hard on the straw to hear the sound, adjust the position of the straw in the water, and the sound will change again.
Scientific knowledge:
When we blow into the straw, a jet of air is produced. When this horizontal airflow passes through the mouth of the longer straw, it causes the air column in the straw to vibrate, resulting in a faint but stable sound. As the longer length of straw descends in the water, the vibrating air column shortens, creating a higher-pitched sound, and the straw rises and the air column lengthens, creating a low-pitched sound. 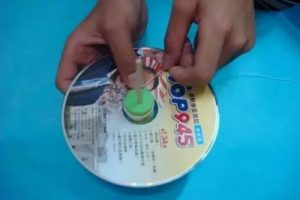 Experimental operation:
(1) Decorate the disc with various sticky notes, and then insert a small wooden stick of moderate thickness through the small hole in the disc and fix it.
(2) Let the children turn the gyroscope, and then let it spin, and see who has the longest spin gyroscope.

Scientific knowledge:
The gyroscope is an ancient children’s toy, a revolving body that turns on the ground. When the gyroscope rotates, it not only rotates around its own axis, but also makes a conical motion around a vertical axis. 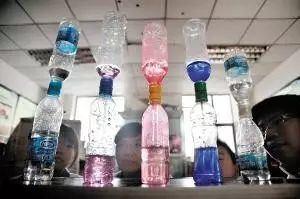 Experimental operation:
(1) Two identical water bottles are grouped together, and some sand is placed in one of the water bottles. The amount of sand loaded in each set of bottles was the same.

(2) Put the bottle mouths of each group of mineral water bottles opposite each other and fasten them with transparent tape, you can make simple decorations on the bottle body, and the hourglass is finished.

(3) Invite the child to invert a set of hourglasses, observe the flow of sand, and record the time when the sand runs out.

(4) Invite the child to turn upside down several hourglasses of different sizes at the same time, and compare the different times when they are finished.

An hourglass, also called a sand clock, is a device for measuring time.The hourglass consists of two identical bottles, which are connected by a narrow connecting pipe in the middle. The fine sand trapped in the upper bottle slowly flows into the bottom bottle through the middle thin tube. The time required for this process can be used to measure time.

Once all the sand has flowed into the bottom bottle, the hourglass can be turned upside down to measure time. The advantage of this hourglass is that it can be used on both sides, turn it over, and the bottom can be used as the top. 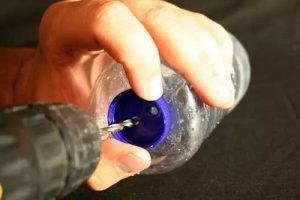 Experimental operation:
(1) Poke a number of small holes with the same diameter on the side of the bottle body of a sprite bottle in a vertical row.
(2) Poke several small holes of different diameters on the cap of another sprite bottle. 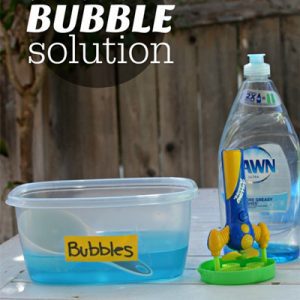 The proportion of bubble water will affect the effect of blowing bubbles. Generally, you can use the bubble water that is prepared with 2 parts of detergent and 6 parts of water. Glycerin is a hygroscopic liquid that combines with water to form a weaker chemical binder that slows water evaporation. So, in order to make the bubbles not disappear so quickly, you can put some glycerin in the bubbling water. Typically, the best formula for a bubble-blowing solution is: 2 parts meal wash, 6 parts water, and 1-4 parts glycerin. Through the bubbles we can see colorful light because of the refraction of the light as it passes through the membrane of the soap bubble.

Materials preparation: flashlight, doll (opaque object), glass cup (transparent object), plastic cup (translucent object), paper, pen.
Experimental operation:
(1) Put three kinds of objects on the floor, let the children irradiate them with flashlights, observe and record their shadows.
(2) Change the position of the flashlight to illuminate the small doll (opaque object), observe and record the shadow formed by the doll.
(3) The flashlight does not move, change the distance between the doll and the flashlight, and observe the change in the size of its shadow.

Scientific knowledge:
When light travels in a straight line, if it is blocked by an opaque object, it will form a shadow on the back of the object. Light can pass through transparent objects completely, so completely transparent objects cannot form shadows; when light passes through translucent objects, part of the light is transmitted, forming a translucent shadow. The shape and size of the shadow will be different depending on the angle of light irradiation. The size of the shadow varies depending on the distance of the object from the light source. 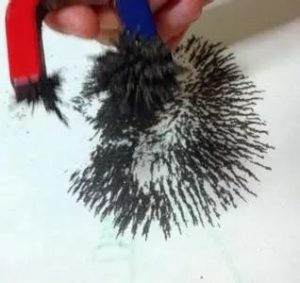 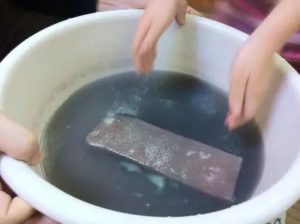 (1) Cut newspapers, electro-optical paper, paper towels, and kraft paper into strips of the same size, and then tape one end to the ruler so that the hanging strips are the same length. Place the ruler above the water surface by hand, let the strips of paper immerse in the water at the same time, and let the children observe which strip of paper rises faster, indicating that it has a strong ability to absorb water.
(2) Spread the four different papers on the table, and drop the same amount of water droplets on each piece of paper at the same time, and see which paper the water droplets spread the fastest.
Scientific knowledge:
There are many tiny holes in the plant fiber of paper, and the attraction of the fiber to water is greater than the attraction between water molecules, so that it can attract and retain water molecules under the action of gravity, which is called the water absorption of paper. Because the size and number of holes in the plant fibers of different papers are different, the strength of their water absorption is also different. 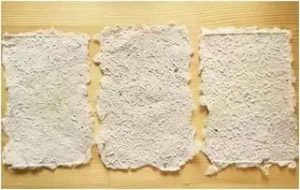 Experimental operation:
(1) Wet the waste paper and shred it, the smaller the better, and then soak it in an appropriate amount of water.
(2) Let the child wear rubber gloves to scratch the soaked paper, add glue and stir evenly with a wooden stick.
(3) Put the prepared pulp on the gauze net to dehydrate, and then spread it evenly on the plastic board and lay it flat to dry.
(4) Let the children feel the fun of making paper by themselves, and write and draw on the dried paper.
Scientific knowledge:
Paper is a sheet-like fiber product used for writing, printing, painting or packaging. Generally, it is formed by staggered combination of pulped plant fiber in water suspension on gauze, preliminarily dehydrated, and then compressed and dried. China is the first country in the world to invent paper.